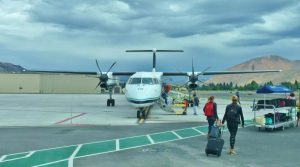 Alaska Airlines to use Advanced Technology to improve Sun Valley airport access New procedures will increase reliability and reduce weather-related diversions by 95 percent SEATTLE — Alaska Airlines’ sister carrier, Horizon Air, has received approval from the Federal Aviation Administration (FAA) to begin using its proprietary Required Navigation Performance (RNP) instrument approach procedure at Friedman Memorial Airport near Sun Valley. The procedure is expected to reduce weather-related diversions by 95 percent allowing Horizon to have the best access to Sun Valley of any airline. It is projected to reduce diversions for Horizon from an average of 40 to 50 per year down to one to two estimated diversions per year.

RNP technology allows aircraft to follow precise three-dimensional curved flight paths through difficult terrain using a combination of onboard navigation technology and the Global Positioning System (GPS) satellite network. It allows aircraft to fly safer flight paths, provides more reliable landings, and eliminates reliance on ground-based navigation aids. This enables pilots to navigate aircraft more precisely and efficiently, while also being able to fly to lower altitudes in to airports where limited visibility upon approach is common due to weather and characteristics of the terrain.

This effort, which has been in development for more than 10 years, will allow Horizon to deliver more reliable service for its valued customers. Additionally, the company expects to save up to $600,000 a year by completing flights that would have would have otherwise been diverted or cancelled due to weather. Alaska and Horizon Air are the only major U.S. carriers with a fully RNP-equipped fleet and fully-trained flight crews. “Just in time for the ski season and holiday travel, the expected improvement in reliability this brings to our airport during inclement weather will greatly benefit our customers traveling to the area as well as local residents,” said Chris Pomeroy, airport manager at Friedman Memorial Airport. “This is a fantastic complement to the other recent facility improvements, including our newly renovated passenger terminal and new concessions.”

Related Articles
Uncategorized These Are The Top 30 Resorts in the West Did your favorite make the list?   It’s that time of the year again, when SKI releases the results of our annual Reader Resort Survey ranking the top ski resorts in North America. And after the pandemic season we all made it through, it was anyone’s guess which resorts were going to come out on […]
Uncategorized 13 Scenic Fall Foliage Trips That Aren’t in New England From New Mexico to Wisconsin, leaves are turning. When temperatures cool across the United States, the colors of the leaves heat up. States like Massachusetts, New Hampshire, and Vermont seem to steal all the glory when it comes to fall foliage and leaf peeping opportunities—but what many travelers don’t realize is there are a bounty of destinations for watching the […]
Uncategorized Skyrocketing Home Prices Mark Biggest Gain in 40 Years By Julie Miller Aug 4, 2021 Home prices notched their biggest annual growth since 1979 in June, during an extra-hot summer for real estate, fueled by the ongoing COVID-19 pandemic. Nationally, sale prices shot up 17.2% in June compared with a year ago, according to a recent report from real estate data provider CoreLogic. They rose 2.3% from […]