New Ketchum Hotel Is A Go 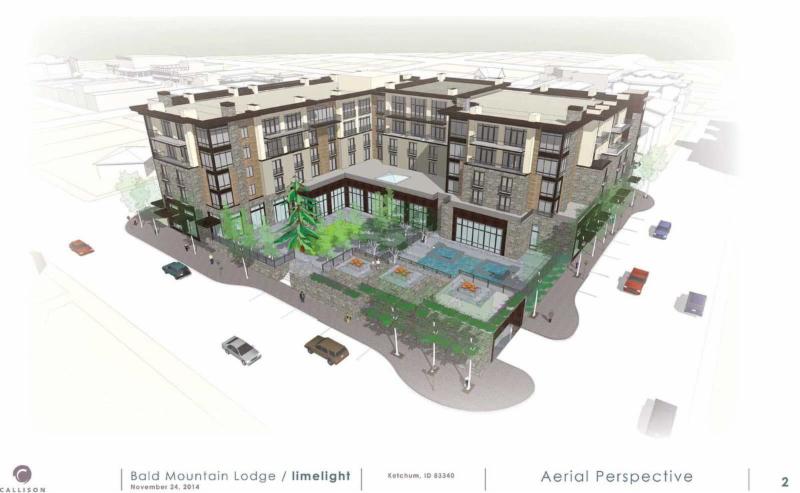 After months of speculation, the Colorado-based Aspen Skiing Co. closed Monday, Dec. 29, on a downtown Ketchum property earmarked for the Bald Mountain Lodge. The property and rights to the approved project were purchased from Bald Mountain LLC, a Seattle-based development group. The parcel is located on the southern end of Main Street, occupying an entire city block between First and River streets.

The company plans to replicate on the property the Limelight Hotel in Aspen. Lodge design renderings have changed in accordance with the Aspen Skiing Co.'s vision. The hotel will have more than 100 hotel rooms and a few dozen lock-off and residential units.

"We believe that the Limelight would be a great fit for this site and the community," said Don Schuster, vice president of hospitality for the Aspen group. "We feel the timing is right to grow the Limelight brand and that this property in downtown Ketchum is an ideal location. We look forward to being a part of this great community."
The Limelight's accommodations have been described by City Planner Rebecca Bundy as "luxurious yet casual."

The 151 S. Main St. property has been eyed for hotel use for several years. More than 10 years ago, Ketchum resident Brian Barsotti tried to develop a hotel on the site. Bald Mountain LLC received a development agreement for the project in 2010, following the submission of an application in 2009. Unfortunately, the hotel's progress was quelled by the economic recession and the developers said capital opportunities had dried up. Bald Mountain LLC applied for three time extensions over the next four years to its original development agreement. The final extension was granted in November of this year.

"We would like to thank the city of Ketchum for their cooperation and flexibility on this project, as well as extending the development agreement through the recessionary period," said Steve Burnstead, of Bald Mountain LLC.
The hotel recently qualified for the new Idaho Tax Reimbursement Incentive and will see a sizable return on taxes following its first year of operation. The Idaho Department of Commerce awarded the project $132,000 at the beginning of December, following an application and review process.

To qualify for the incentive, companies in rural areas such as the Wood River Valley must create a minimum of 20 new full-time jobs that pay more than the median county wage. The $132,000 sum represents a 16 percent tax reimbursement and the so-called "Project Baldy" is one of six approved projects statewide. The tax reimbursement incentive was voted into effect July 1.

Schuster told the Idaho Mountain Express that the company plans to finalize the hotel's building application within a month so it can go before the Ketchum Planning and Zoning Department by February. He attended a November P&Z meeting for a work session with commissioners regarding Aspen Skiing Co.'s proposed design-review changes to the architectural plans.

The changes, including a slightly decreased building height and a flat, rather than pitched, roof, were discussed at the November P&Z meeting and Schuster said Aspen Skiing Co. will continue to work with Ketchum on the modifications.

Aspen would need to submit a building permit application by May 31, 2015, and commence construction by Nov. 30, 2015, following the third time amendment's stipulations in November. Meeting these timelines means the company will continue to have community- and employee-housing requirements waived.